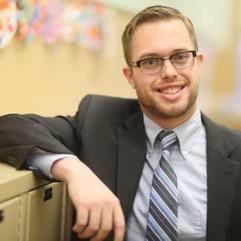 Mike Derrick is a native of Milwaukee, Wisconsin. He spent the past three years as a leader in the Milwaukee-based Seton Catholic Schools network as principal of Mary Queen of Saints Catholic Academy. Under his leadership, Mary Queen of Saints won Exemplary Recognition in the Archdiocese of Milwaukee for Academic Excellence and was the third highest performing private school in the state of Wisconsin as measured on the state report card. Deeply committed to urban Catholic Education, Mike began his teaching career at St. Anthony High School where he served as social studies department chair, founding advisor of the National Honor Society and founding varsity baseball coach. He serves as a confirmation program leader and lector at St. Francis of Assisi Parish and serves on the quality committee for School Choice Wisconsin Action. He is a proud graduate of Marquette University, the Latino Enrollment Institute at the University of Notre Dame and recently completed his master's degree in Leadership and Innovation in partnership with the Center for Urban Teaching at Wisconsin Lutheran College. He is excited to bring his experience in high-performing, urban, Catholic education to Cristo Rey San Diego.
Mike will formally begin his role on July 1, 2019 in preparation for the opening 2020-2021 school year.